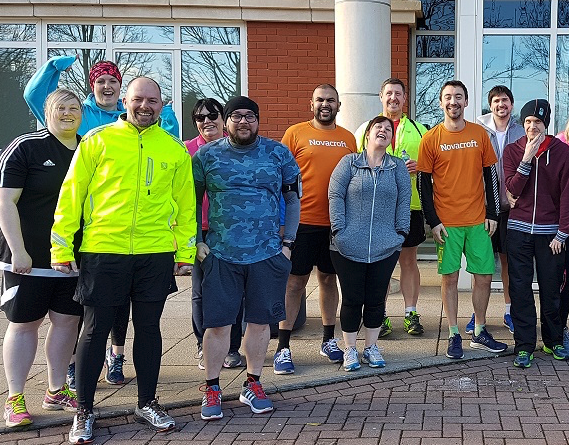 Determined and committed runners celebrate with a graduation Parkrun

Now that spring is here, it seems like a while ago that all those New Year’s resolutions were made. Many of us start the new year with good intentions…making small changes which will make us healthier or happier. But it’s not easy to stick to those resolutions, especially in the dark and cold months we’ve had.

Through wind, rain, sun and snow the team has ran and plodded their way to glory, receiving a medal and certificate of completion at Northampton’s newly established Sixfields Upton Parkrun; the reward for 9 weeks of hard work.

We were delighted to be hosts to a group of runners who completed their inaugural 5km event after successfully completing the Couch to 5K programme. They all received a well-deserved finisher’s medal from their leader at the end of their Parkrun.  Well done to them all.

Every runner contributed £1 for each training session they attended towards Novacroft’s charity of the year, the RSPCA Northamptonshire Branch, which was matched by CEO & Founder, Debra Charles. Added together, the runners have raised over £600!

As an additional incentive, all runners who completed the 9 week course were put into a draw for £100 towards running trainers. The winner was Tina Munns from our Governance & Business Improvement team, who was thrilled to win:

I was so happy when my name was pulled out of the hat. At the start of the Couch to 5K, I struggled to run for 90 seconds, and now that it’s finished, I’m still running for 30 minutes twice a week! Winning new trainers, which I’m off to get properly fitted for this weekend, is brilliant!

We asked our runners how they felt about their Novacroft Couch to 5K experience, and here’s what they had to say:

At first I found it hard. I wasn’t fit at all with not doing any form of exercise for well over a year. I was surprised at how quickly I gained fitness. Following a programme which was supported by experienced runners really helped me to improve and run the 5km just 7 weeks into the course. I have the bug now and want to continue to run at lunchtimes to sustain my new found fitness.

I had a fitness tracking app on my phone for years, never used, before the Novacroft Couch to 5K group. I am an overweight, busy mum who always had an excuse why I didn’t and wouldn’t be seen dead in anything with a lycra content. As the snail of the group I was never judged by anyone (and there are some serious inspiring athletes in that group) and I achieved 5km, which considering the moaning I did when we first ran for 90 seconds is a miracle! I’m not going to lie, I don’t enjoy running, but the positive outcomes have been huge. If I can do it anyone can…

Dave, our run leader, put a lot of effort into organising the programme and motivating everyone during it. What did being Novacroft’s Couch to 5K run leader mean to him, and how does he feel at the end of the course?

I left the army over 15 years ago, and when I was reintroduced to running recently, it all started with a 5km distance. I noticed within my running club that there was a lack of UK Athletics Run Leaders so a couple of us took it upon ourselves to attend.

Running a Couch to 5K at Novacroft, I have given back what others and all the running clubs have given me – safe, fun and organised runs. Being able to lead a Couch to 5K myself was brilliant and a change to what I do with my running club. I’m so chuffed to see everyone on the programme continue running afterwards, because it is so easy to let it slip – keep up the good work everyone.

Novacroft is committed to supporting and investing in the wellbeing of team members. Debra Charles, Novacroft’s CEO & Founder, has long supported health and wellbeing as essential to running a successful business, and believes that recognising and supporting the individuals at the heart of your operations is key to this. Debra, who funded the £100 towards running trainers for one lucky Couch to 5K runner, said:

I truly believe that it’s a strength to enable people to put their wellbeing first, and that you’ll ultimately be rewarded with a more stable, stronger business if you recognise and support the individuals providing the backbone of your operations.

When you’re running (or doing any sort of exercise) you get time to think, or not to think, time to just be, and you really do get a great sense of achievement. It’s amazing. ​Huge thanks to Dave Gaskell for putting this plan together and to Dave and others who have given their free time to help. It’s brilliant. I’m so inspired by you all.

What next for our determined runners? Getting out there and getting active has made a real difference to their lives. All are still running, whether it’s a lunch run, a Parkrun, or a run commute. All are feeling more productive for it. The health and wellbeing benefits are clear: getting out, moving more, and laughing together as a team is so much more than a new year resolution, it’s a new way of life.

Novacroft plans to run a further Couch to 5K course later this year.

We use cookies on our website to give you the most relevant experience by remembering your preferences and repeat visits.
Cookie settingsACCEPT ALLREJECT ALL
Manage consent

This website uses cookies to improve your experience while you navigate through the website. Out of these, the cookies that are categorised as necessary are stored on your browser as they are essential for the working of basic functionalities of the website. We also use third-party cookies that help us analyse and understand how you use this website. These cookies will be stored in your browser only with your consent. You also have the option to opt-out of these cookies. But opting out of some of these cookies may affect your browsing experience.
Necessary Always Enabled
Necessary cookies are absolutely essential for the website to function properly. These cookies ensure basic functionalities and security features of the website, anonymously.
Functional
Functional cookies help to perform certain functionalities like sharing the content of the website on social media platforms, collect feedbacks, and other third-party features.
Performance
Performance cookies are used to understand and analyze the key performance indexes of the website which helps in delivering a better user experience for the visitors.
Analytics
Analytical cookies are used to understand how visitors interact with the website. These cookies help provide information on metrics the number of visitors, bounce rate, traffic source, etc.
Advertisement
Advertisement cookies are used to provide visitors with relevant ads and marketing campaigns. These cookies track visitors across websites and collect information to provide customized ads.
Others
Other uncategorized cookies are those that are being analyzed and have not been classified into a category as yet.
SAVE & ACCEPT